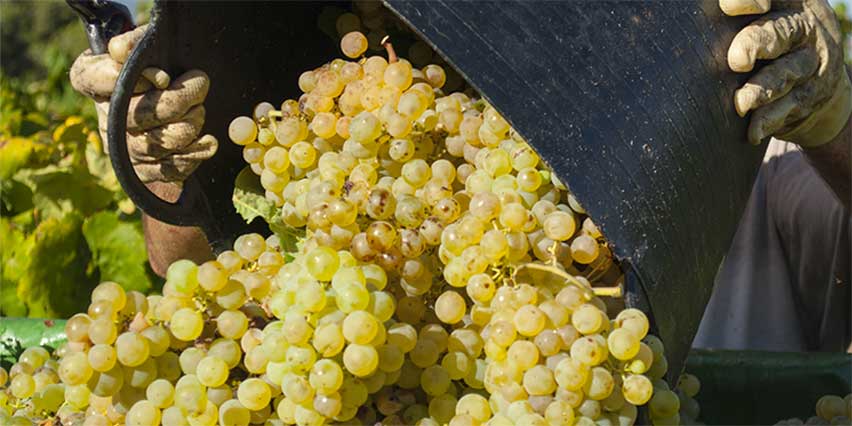 2017 has been a difficult year for wine producers in Liguria, as well as in the rest of Italy, due to significant climate changes, which are affecting our country as well as other areas of the planet. The lack of an articulate seasonal cycle, as there once was, and unpredictable weather events, which are having a serious impact on the environment, are putting a strain on agricultural produce and its farming. The initial assessments speak for themselves – Coldiretti estimates a 30% decline in national production, Assoenologi 25%  – as confirmed by the wine makers of the eastern and western Ligurian  coast, who shared with us the evolution of the past harvest which took place earlier compared to previous years. Whereas the grape harvest used to start the first days of September, today it takes place 15-20 days earler . Ivan Giuliani of the “Terenzuola” –wine farm began harvesting on the 15th of August (Ferragosto). This  farm, which is located at the highest point of the Luni  Hills, between Liguria and Tuscany, adopted a two-phase harvest, ending up with excellent results. The relief granted by a less muggy August, after a scorching June and July, allowed a part of the grapes to continue ripening for a few more weeks. And so the second part of the harvest took place in September. The 2017 harvest was a harsh test even for someone like Ivan, who has 25 years of harvesting experience. Global warming – he says – will be the problem which local wine makers will have to face in the coming years, forcing them to deal with frost, drought and temperature inversions.

From Fosdinovo to the hills of Ortonovo, Andrea Marcesini of the La Felce wine farm, registered a 15% decline in production compared to the previous year;  on the other hand, he managed to maintain the grapes healthy and to bottle white wines of very high quality. “The main problems were with the lands further downstream”, says Andrea. This is where we registered our major losses. “Besides the heat and the drought, we had to struggle with insects and other animals, including wild boars, who went to search for water right in the plants and fruits”.

Leaving the hills of Luni, we head towards the Cinque Terre to talk to Samuele Heydi Bonanini of the Possa wine farm who states: “Compared to last year, we started harvesting on the 15th of August and there was a 25% yield decline . Also the grape processing for the production of the Sciacchetrà wine began earlier than scheduled, taking place the 17th of October, instead of the 2nd of November, two weeks in advance.

It is a complex situation the Ligurian wine producers have had to deal with. Both the east and west coast of Liguria face similar problems: healthy grapes ripening too soon, 15% decline in production,  mild winters, spring frosts, drought and unexpected summer storms. A perfect example is the hailstorm that struck the  Imperia area at the end of last July, but did not hit the “Kà Macinè” wine farm of Maurizio Anfosso. This producer, a recent winner of the “Tre Bicchieri” award of the renowned Gambero Rosso guide, spoke to us of a reasonably good harvest. “The harvest that began 20-25 days earlier, approximately the 10th of September, has just been concluded with remarkable results. Despite the drought, we can actually speak of a good 2017 vintage.” Maurizio dealt with the drought by installing a sprinkler system, which helped maintain the soil moist. What he wasn’t able and will not be able to make up for, is the absence of the seasons: mild winters, early springs and hot summers which jeopardize the ripening period of the grapes and consequently the role that the daily temperature range plays, or should play, on the quality of production.

East to west: most awarded ligurian wines of 2017

East to west: most awarded ligurian wines of...

Wine Influencer: who are they and what they...