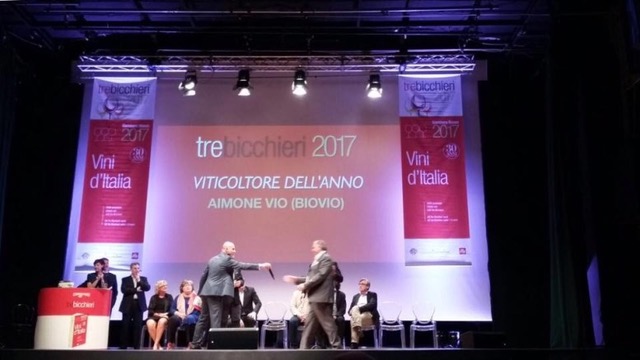 “You have to produce wine, you can do it properly and, above all, you have the wineyards at Marixe.” “Pippo Parodi had been saying that to me for years, pushing me to introduce a wine cellar at my farm”, Giobatta (for friends, Aimone for everyone else) Vio says, whilst sitting down on one of the benches of his cellar in Bastia d’Albenga, something which does not happen very often. In front of a bottle of Bon in da Bon, his flagship Pigato, awarded with Tre Bicchieri by Gambero Rosso (just to mention it).

Last year, Aimone was awarded by Gambero Rosso as the best winemaker in Italy, an acknowledgement which places him at the top in this field, next to great names such as Gaja, Antinori, Felluga and so on. A Ligurian producer had never received this award before.

The wise philosophy of Ligurian farmers is summarised in Aimone’s words: “Thanks to winemakers such as Pippo Parodi, Aldo and Umberto Calleri, wines from Liguria have reached extremely high results, their work has inspired a new generation of winemakers and given character to Pigato, Rossese di Albenga (not to be confused with Dolceacqua), Ormeasco. Therefore, when I was named best winemaker, I ideally shared this award with my colleagues from the Ligurian Riviera. And I obviously thank my wife Chiara and my daughters Camilla and Carolina, who have worked with me during these years.”

The history of the farm BioVio is intertwined with Aimone’s life. Aimone , who was born in 1957, was a footballer in the past and played in Albenga’s and Diano Marina’s youth teams. “But after I finished school, football playing continued alongside the work I was doing with my father in the fields. At the time, we specialised in vegetables and mainly in artichokes”, Aimone says. He adds: “In the 80s, I completely changed production; they told me I was mad because I started producing sage and rosemary and aromatic herbs. I did not want to sell little pots, I had understood, thanks to the advice of an old friend, that large retailers were going to revolutionise commerce. The little bunches of sage and rosemary which were given to customers as a gift by the butcher’s or by the greengrocer’s were going to disappear. Therefore, I decided to put these herbs in a small plastic tray and to sell them in supermarkets. Time, luckily, has proved me right.”

In 1999, another revolution took place: the wine cellar was added to aromatic herbs production. The grapes, which earlier were sold, were now processed at the farm and registered immediate success. The land in Marixe complemented the one in Ranzo, which belongs to Aimone’s wife. Later on, other plots were bought.

BioVio (Aimone has been always producing according to strict organic criteria) is currently producing some 60,000 bottles per year on 16 ha of vineyards. BioVio (whose core business remains aromatic herbs) now plans to focus on olive oil and farm tourism, which was launched a few years ago and has been registering enthusiastic reviews from tourists from all over Europe. Agriculture and tourism, according to the Winemaker of the year, can coexist.

The organic farm BioVio is based in Frazione Bastia, Albenga, and comprises 17 ha of land, divided in several plots located along the creek Arroscia, between Bastia and Ranzo. The farm grows Pigato, Vermentino, Rossese and Granaccia grapes according to the organic farming certification Biologico Certificato Icea, which bans chemicals. The cellar is in the centre of Bastia, the wine-making process takes place in steel containers and is activated only through native yeasts. “ In the agricultural dimension of our family, wine represented earlier just a pastime, but now, thanks to the passion and dedication of each one of us, labels such as MaRenè, Bon in da Bon, Grand- Père, Aimone, U Bastiò, Bacilò and Gigò, in addition to the traditional Pigato, Vermentino, Rossese, Granaccia have left an impression on wine lovers as synonyms of quality and uniformity of production: wines are not created through the will of a single person, but of the whole family,  Aimone says.

The peak was reached last August, when the new V8 Gran Turismo Ferrari Portofino, derived from the California model, was unveiled in Portofino. The car, in the plans of Maranello, aims at “dominating its segment thanks to a perfect combination of elegance and comfort”.The exclusive event attracted the elite of the motoring sector and was accompanied by BioVio’s wine Pigato Bon in da Bon. “For us, it was a great honour and pride to see our label next to a brand which represents Italian excellency all over the world. We hope that the event helped to promote our territory.” There is no doubt that this is what happened.

“Green is the new black”, according to the Giannarelli brothers