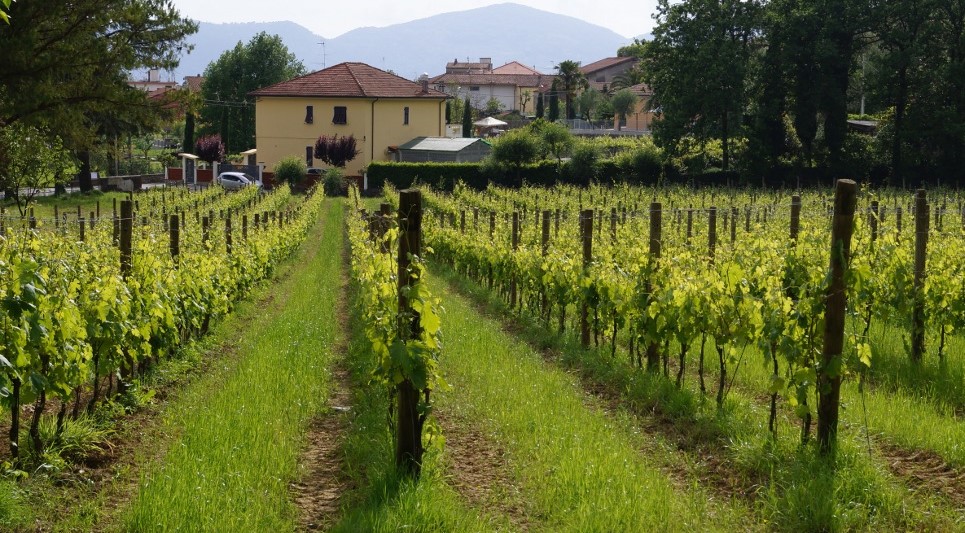 There are some cases, in a person’s life, when the achievement of the ideal condition corresponds to the return to one’s origins, to the territory where one’s roots are deeply planted. Often, one’s own personal history extends to that of a place, where its outstanding qualities start blooming again.

This is the case for Alessandro Vignali, who in 2006 established Terra della Luna, a wine producing company in Ortonovo (La Spezia), located at the border between Liguria and Tuscany. The company produces excellent wines, including two types of Vermentino DOC Colli di Luni.

Vignali grows his grapes with passion and skill on a land which belonged once to the Fabbricotti family, ancient owners of the Tenuta di Marinella estate, which produced refined wines there already two centuries ago. Nowadays, Terra della Luna pays great attention to ecological sustainability and draws its strength from the unconditional love for nature, which led Vignali to go back to this activity, after having made quite different experiences.

The bond with the territory appears very strong, from the choice of the name of the company and the land, which belonged to the Fabbricotti family. Is it so?

The current activity is the result of life experiences, the awareness about our roots and a feeling of belonging to the territory are the basis on which to build the future. I was lucky to have had a happy childhood in Marinella di Sarzana, I was born three km far from my company’s site, in a farmhouse of Tenuta di Marinella estate, on Taruga street. Now all those houses are abandoned, because of inadequate choices, made by heartless (and not only) people. The love for my children and nature, the wish of being able to give them a childhood in touch with nature gave me the strength to set up Terra della Luna.

My grandfather Giuseppe, born in 1898, came from Casciana Alta (Pisa) to Marinella di Sarzana to help with the management of the estate, which had recently been sold by the Fabbricottis to Monte dei Paschi di Siena. He ordered in the 1930s to uproot the pergola vineyard  to produce a better-quality wine with the wall method. The Fabbricotti’s land marked my daily life. Terra della Luna spreads on a land called Pezzo Grande, where the Fabbricottis already produced their personal stock Bianc Bon in 1800. The land is located in a valley between the Ligurian hill of Nicola and the Tuscan hill of Monteverde.

Grey clay is present at a depth of 50 cm: the clay soil, combined with a microclimate with high thermal excursions, allow to produce wines with a strong character.

Ecological sustainability appears to be an issue of importance for the company. Tell us something about this.

I have always loved nature, when I left my job after almost 20 years of service as Marshal of Carabinieri, engaged in investigations against international drugs trafficking, I tried to set up a company with a very low environmental impact. The cellar and the house were built with ecological materials (supporting walls in mineralised wood, mixed with cement and graphite), without resorting to fossil energy, we have photovoltaic panels and only air-water heating pumps to warm the water and for wine barrels and for toilet water, while in the kitchen there are induction cookers, a fireplace and wood oven. The cellar is buried deep into the hill ground for three-fourths, while the northern side is covered with stones from Montemarcello.

The awareness that any flat could use air-water heating pump technology, which enables to cut costs by one-fourth compared to methane gas and presents no risks of explosions, makes me realise how important it is not to betray one’s beliefs, not to follow fashions and trends, not to listen to media messages saying that we must build gas pipelines.

The Terra della Luna wine is called the “wine of the farmer”. Can you explain in what sense and briefly describe the types of wine which you produce?

I consider as natural wines those wines which respect seasons and where chemicals are forbidden in the cellars.

Vermentino wines are Plinio DOC Colli di Luni and Lun’Antica IGT (with maceration on  peels and produced as a red wine), the reds are Caligré IGT Liguria di Levante and Vignali di Luna, which are kept for two years in large oak barrels.

The wines have alcoholic strength of 13, while the reds can reach even 15, but despite the important texture, they remain fresh. I like to interpret the season and try to get the best even from an unfavourable season, for instance in 2014 (23 days of rain in July) I harvested on October 17 and the Vermentino after 27 days of wilting on the vineyards, therefore my Plinio 2014 is definitely mineral-tasting and I begin to like it now.

The white wines of Terra della Luna are marketed one or two years after the harvest. The maceration on the peels allows to avoid intervention with sulphites, but needs finishing times, even for the whites which can be recommended for meat dishes, such as “cacciatore” rabbit.

Any project for the future?

I like the idea to reach harvest time whilst further reducing conventional treatments with copper and sulphur, I look forward to the growing awareness of the need to produce wines which are the result of the territory and of the seasons.

Liguria produces 1% of national wine, Lunigiana can only aim at typical production, characterised by territory and microclimate. I like the idea that a tourist can stop in Lunigiana to taste typical dishes and that he may lose himself while visiting the different cellars.

The Cinque Terre of wine: the territorial training Master programme kicks off