The Arrigoni Wine-making Family: an over a century-long story

From the origin of the company to export to Brazil. Through children, grandchildren and guests from all over the world 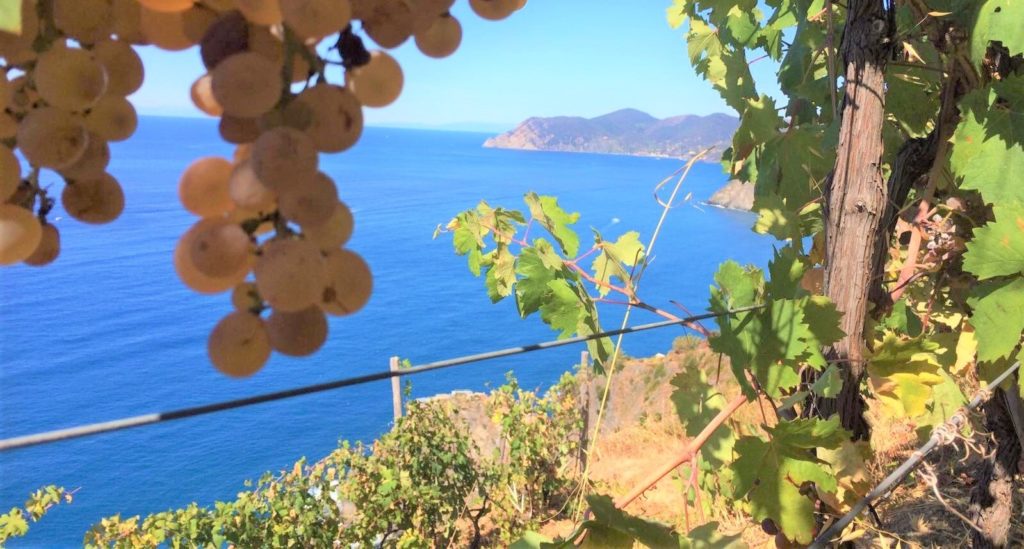 The Arrigoni family is a beautiful, warm family like the ones in times gone. 5 children, 5 grandchildren and a welcoming attitude which nowadays cannot be taken too much for granted. Welcoming us is Milena with her winning smile, met soon after by her husband, Riccardo Arrigoni, white hair and a genuine gaze: the look of a founder. They lead us to the cellar, past the tasting and sale area, nearing completion. Here we find ourselves surrounded by family memorabilia, like the old bottles neatly lined against the wall, and by new features, such as the balsamic vinegar aging in casks. We sit at a big table which during our chat will be filled with all kinds of good things: from a freshly baked apple strudel to glasses of red and white wines. And, in its homey atmosphere, we get ready to listen to a story which began long ago, told in two voices.

Lets start from the beginning. It was 1913 when the wine farm was established.
Riccardo: Granfather Gervasio Pagni, born in1881, arrived to La Spezia at the beginning of the 1900s. He was from a hamlet of 5-6 houses, between Florence and Lucca, close to Altopascio, but life there was not for him. He had some cousins in La Spezia and so he moved there, in Via Sarzana, where everything started. He got married and began to work, first selling farinata (pancake made with chickpea flour) and castagnaccio (cake made with chestnut flour) and then importing wine from his village, thus starting his business. He was widowed very young and got remarried to a woman, herself a widow, Lina Arrigoni, who was pregnant with Bruno, my father. In fact the name of the company, initially Pagni, was changed to Arrigoni when it was taken over by my father Bruno in the ‘50s, and in turn by me, who grew up on the farm and gave up a military career to run the family business.

Together with you, Riccardo e Milena, some of your children are continuing the story of the  Arrigoni business
Milena: What with children and grandchildren we do not lack help! The ones who mainly work with us are Andrea e Sara. It has been thanks to them that we have made a quality leap. Andrea is an agronomist who has built experience travelling halfway around the world. He even worked in vineyards in South Africa and he now runs the estate in San Gimignano.  Sara, who is an enologist, has been a great help in making the business grow..

Pietraserena (Literally “Serene stone”), Rosadimaggio* ( “May rose”), suggestive names for two different types of companies.
Milena: Pietraserena is our Tuscan branch at San Gimignano, where we produce Chianti, Vernaccia… Rosadimaggio is our winefarm in Liguria and has a total of 19 hectars of vineyards between Colli di Luni and Cinque Terre. The vineyards extend from Castelnuovo Magra, Arcola, precisely at Masignano  (the “Prefetto” vineyard) to Riccò del Golfo and Sarzana. We also have 5 hectars at Cinque Terre, which is huge for this area. We began with a plot at Tramonti and then extended the property to the Corniolo, at Corniglia and to Piculla, above Vernazza. And as we speak, Sciacchetrà is being “squeezed” at Cinque Terre 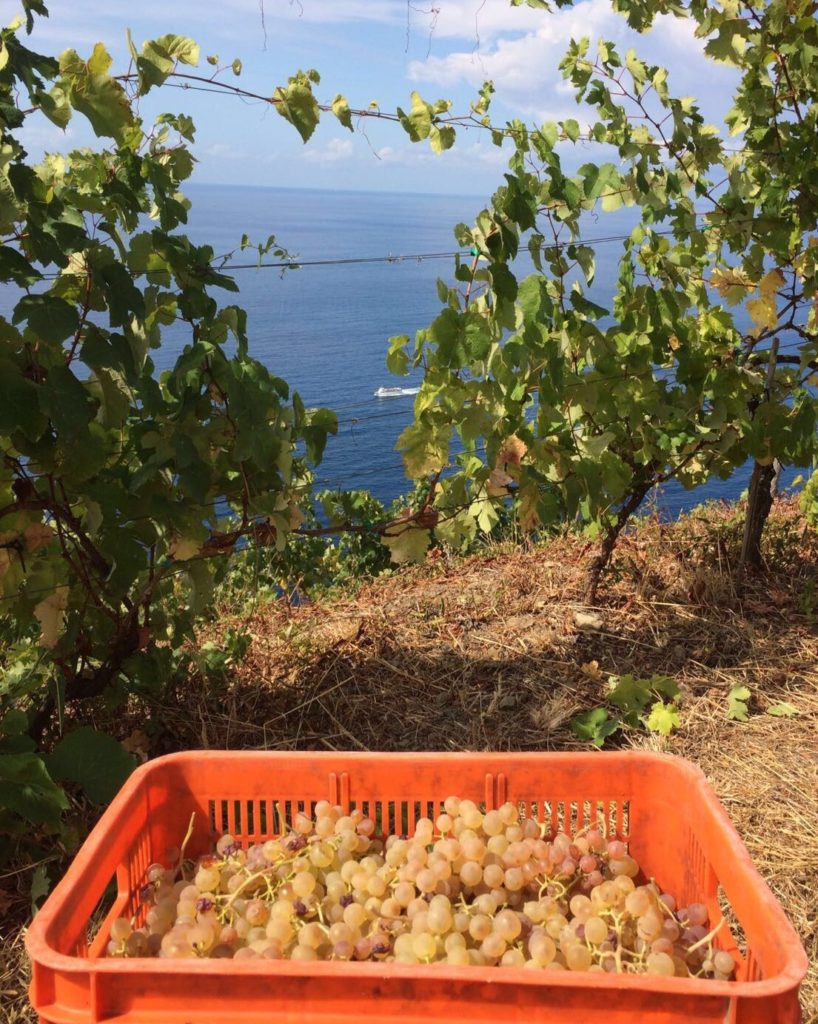 We have produced 11 vintage years of Sciacchetrà. They are not few …
Milena: We are very proud of this little family treasure. With our 11 vintage years we could have a vertical Sciacchetrà tasting, spanning from 1991 to 2012. We still shell the grapes from this vine by hand, one by one, and do the crushing by barefoot stomping in a wooden vat bought at Terni, as none can be found around here anymore. And this year we’ve also had the help of our 4 and a half year-old grandaughter, who likes to be called the “wine doctor”.

What are your relations with the foreign market?
Riccardo: We’ve been involved in international trade since I took over the business in the ‘70s. In the beginning, we exported 70% of our  production to Germany and to the U.S. and we purchased grapes from others. For years we had the label of “traders” stuck on us, but  I wanted to get to the point of saying that the wine we sold came exclusively from grape we farmed.  We have given our body and soul to our farming adventure and today we can say that we sell only what we ourselves produce. We have a nice range of products and we produce 200 thousand bottles many of which end up abroad in Columbia, Thailand and especially Brazil.

Last July you took part to the Gala Dinner hosted by Aretuseo, a company in San Paolo, and on that occasion you presented Ligurian wines in Brazil … (see the article by MIDDIAmagazine)
Milena: With Aretuseo, our importer, we’ve had a consolidated relation for several years. Tonino Pedroni, co-owner of the company with Giuseppe Peluso, would like to become ambassador of Liguria in Brazil. His daughter, Giuliana Pedroni, has been our guest for some weeks now, and will stay 7-8 months longer to learn the trade, how to make and how to sell wine. She would also like to acquire the Italian citizenship and is currently listed in our family census. We have also been the first to bring the Americans to Cinque Terre: thanks to our encounter at Vinitaly with an American importer who had fallen in love with Cinque Terre and wanted to learn more, we have accommodated restaurant owners, journalists, people in the sector … we have had many meals on our terrace with over 300 people.We have taken Americans all over Liguria and with some of them we have even become friends.

Which wines do you export?
Riccardo: In  the early years only red wines. Now also Vermentino and Cinque Terre and some bottles of Sciacchetrà.  All the top restaurants in San Paolo have our wines and so do some restaurants in Rio de Janeiro.  That of  Brazil is a growing market, especially for good wines. Brazilians no longer want cheap wines. We export two containers a year, about 25 thousand bottles. There are difficulties, of course: wine appreciation is only now developing in Brazil and import taxes are very high. Plus for a bottle of  Ligurian wine to be appreciated, you have to explain the land. But when you export quality, everyone recognizes it. And the result is worth every effort.

And we, between a bite and a sip, cannot but agree.

See the video on the stumping of grapes to make Sciacchetrà:

Cooperativa 5 Terre: Celebrations on 23 December at the winery

Giuseppe Privitera: “My wine set out to conquer Switzerland and beyond”