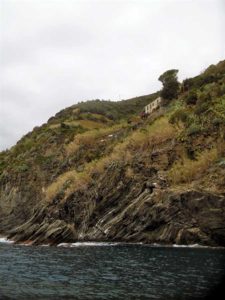 I want to be clear from the beginning: I’m going to be biased. As a matter of fact, I’m afraid it’s going to occur often. This always happens when talking about Vernazza.

Perhaps because of my uncle, his house, my childhood memories when it was still possible to whiz down the alleys where I played hide and seek without bumping into tourists, the rocks where I learned to swim poorly, the birds eye view from the top of the tower climbing up the castle, not only of the sea, which is common in Liguria, but also of the coast, steep hills and terraces.

I am partial when I encounter someone who chooses the land, who is born elsewhere but falls in love with another place, who gives up an important position to choose a new life, and even more so in the presence of these weaving dry walls that sustain, embellish and identify the landscape. The same landscape that encouraged Danish born Lise Bertram and Bartolomeo Lercari, a native, to abandon university teaching to get his hands dirty implementing himself daily in agronomy, where he had achieved high levels of studies.

Obviously, the prehistoric farm has its roots in familiar local wine making, by the resources and knowledge from back then, passed down by many generations, and by the inevitable territorial fragmentation that the terrain and hereditary divisions oblige. The transition from wine tourists, typical owners of a holiday home in the countryside, to wine producers is marked by a dividing line: the listing of the Cinque Terre in the 1997 World Heritage Site. It is at this point that the couple begin questioning themselves of the necessity to preserve this resource, with a renewed sense of responsibility not only toward there own estate, but also towards the whole country, and why not, towards the entire world. The means chosen of how to preserve the landscape and traditions was to make wine, ultimate aim, an “unrefined” wine.  They begin by scraping together some neighboring land, some by rent, and others purchased. In the years, they were already exposed having reached their first goal: the Fossà hill, just above the train station, completely planted with vines, plain to see and control by the locals, the work in the vineyards, from there own balconies. Another result: Cheo is “the” wine of Vernazza. Yes, of course there are local vinegrowers of the co-op farm who give/sell/deliver, and there are some who make wine only for personal use, but there is only one genuine wine farm. If at first the land grabbing of patches of land was looked upon with suspicion (a ligurian tradition, of course), today Cheo is considered a symbol.

Lets talk about the wines. Three Cinque Terre PDO wines, one red wine and one Sciacchetrà wine. There is a precise stylistic choice, an idea of a clear light, and the desire to search for aromatic quality. Naturally it all begins in the vineyard, through environmentally sound agriculture without labels or certification (but just to mention, various awards from Coldiretti) by use of espalier farming in place of the traditional low arbors, very dear to the local shoemakers, and also by use of a substantial foliage apparatus, used to protect the grapes from the sun, which certainly guarantees ripening, but by continuously increasing throughout the years  can cause the wine to lose its finesse. The wine tasting (the few that take place being that the production ends soon and the spaces for stockage are “local” meaning practically inexistent), always restore this richness of floral perfumes and fruitness, almost covering the proverbial minerality of land on the sea. The return taste of the Cinque Terre “CheO” is more savoury, while the “PerciO” has a more rounded and fresh taste. There are not only the two classics whites, since last year a new wine named “Mava” has been produced, named after the homonymous hill just west of the village.

A maceration of the rinds, a method which is being restored in the extreme eastern Ligurian coast, in a reasonable time frame helps gain complexity without losing its finesse. Even the wine barrel tests prove that the award of the Crown of “Vinibuoni d’Italia” received at its first outing is not a casualty. Instead it is a coinicidence that the “Porto di mavà” , that small creek that was so difficult to reach when I still didn’t know who to swim, the steep rocks, crystal clear water, and watching the urchins and fish that were so small that almost required a lens, today has become easier to reach, I simply drink it.

Lecture on Ligurian wines in Bordeaux

The Arrigoni Wine-making Family: an over a century-long...