Maffone Estate: a unique land kissed by the sun and caressed by the marine breeze

After 37 years as manager of an multinational firm, he decides to leave a steady job to return to his first love, the land and the wine. This is the story of Bruno Pollero and a business success in the field of enology.
The Maffone Estate is located in Acquetico, a hill area of Pieve di Teco, close to Imperia. The farm pertained to Eliana’s famly, Bruno’s wife, but for two generations it was nothing more than a vivid memory of the holidays spent with the grandparents. “My father in law was not a farmer, he made wine and oil for the family and sold whatever remained”, Bruno recalls. In 2009, the turning point. “We decide to take back control of the farm. The first few years I continued working, than in 2012, I resigned from my job, to work full time on the farm”. The estate, located at 500-600 meters above sea level, kissed by the sun and caressed by the marine breeze is transformed into a magical place where the tradition of “good wine and oil making” braids with nature. The production, strictly PDO, includes Ormeasco di Pornassio, Ormeasco Sciac-trà and Pigato from the Ligurian west coast. The production also includes, distilled grappa from selected pomace and a line of unfiltered extra virgin olive oil must. 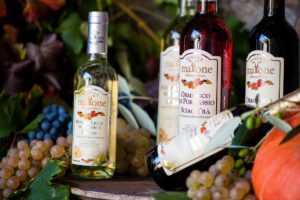 Pollero continues: “Neither solfites nor chemicals are used for our production, only natural resources. Our wine expert, Marco Biglino, helps us promote the Ormeasco wine, top of the line of our production. Thanks to him, we have produced a sparkling wine called “DueLuglio”, which is giving us great satisfaction”. Satisfaction meaning awards and mentions on gastronomical guides and competitions. Today,the Maffone Estate is a functional wine company with an area dedicated for sampling and exposure (becoming always more international), and a production of over 10 thousand bottles per year, destined to increase in the follwing years. What’s our next challenge ? “We have won a bid to manage the farm of an ex mountain community, containing precious vine plants. In collaboration with the University of Turin, we are opening the farm to relaunch it and make it operational for all of the viticulture of eastern Liguria, a field which can still give great satisfaction” concludes Bruno

Sciacchetrà? A blonde braid that shines in the...

Roberto Petacchi: “the best Vermentino in the world”