The story of an Arroscia Valley vine grower and lover of an ancient wine: the Ormeasco 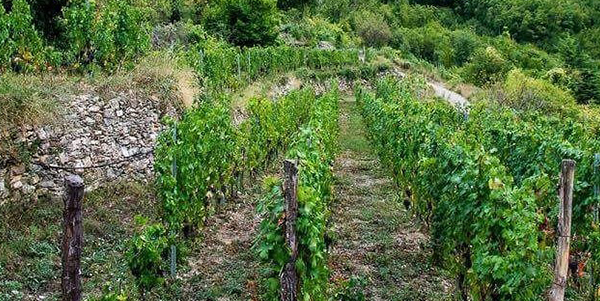 Few would have said that this youth from well-to-do family in Imperia, the rebel driving a Volkswagen Beetle, a sociology student (got his degree) in a Bologna full of the kind of taverns sung by Guccini, and permeated with the rebellious winds of the seventies spread by Radio Alice; the Bologna of the Skiantos and of songwriters’ music tinged with punk, would become one of the most prestigious makers of an ancient wine,the Ormeasco, the “smallest POD in Liguria”, confined within a few hectares of the Arroscia Valley. Marco Temesio, 53 , owns, together with his business partner Gabriele Maglio, the Cascina Nirasca, a 4 hectars wine farm between  Pieve di Teco and Pornassio. Speaking with Marco means constantly bouncing between his knowledge of humanities and his passion for wine. «A passion I acquired when I was about thirty; before then I wanted to be a writer and journalist », he says.  The brainwave hit me not on the way to Damascus but on that of Pieve di Teco. It was caused by my encounter with the Ormeasco vine. «It’s a red stalk dolcetto and the smallest PDO in Liguria, as it is produced exclusively in the Arroscia Valley. It is told that this stalk variety was introduced to the Arroscia Valley back in 1300  by the Marqui of Clavesana who, during his rule of the area, ordered the population to plant only this type of vine. Despite its limited yield, it is an eclectic vine. The PDO specifications provide for its vinification into red, white, rosé, bubbly and into a sciac-trà version, which has nothing to do with the “passito” from 5 terre, but is traditional wine of the Arroscia Valley», says Temesio.

Cascina Nirasca was established in 2003, when Marco had already acquired some experience in other wine making companies. Temesio takes care mainly of marketing, Gabriele looks after the vineyards and the wine cellar.   «We make wine in a territory traditionally devoted to oil production, but our vineyards have characteristics not found in many other places, because despite being in the countryside, they are only 25 km from the sea, which creates a unique habitat. We have about 4 hectars of vineyards at 4-500 metres of altitude. We control the entire production chain: vine growing, wine processing, packaging and marketing. Besides Ormeasco we produce Pigato and Vermentino. The secret of the quality of our wines is the work in the vineyard. Limiting the production of the vines results into richer, sweeter and more fragrant grapes. Of course you then need experience in the cellar, I would even say love, in order to get a great wine », Temesio further explains.
This year, due to the drought, grape production has suffered a decrease of about 15%. On the other hand the quality is excellent. «Right after the harvest, the must had incredible sweetness and fragrance. Now the wine is in the cellar, continuing its aging process and we are convinced that it will be exceptional. It is the surprises that the vineyard and the wine gives you every season that have convinced me I’ve made the right choice not becoming a writer and devoting myself to Cascina Nirasca», Marco concludes. After all with wine you write the story of a land, and if one does it right it will be a beautiful story.

1° Vermentino competition: here are the winners

Maffone Estate: a unique land kissed by the sun and caressed by the marine breeze

Alessandro Vignali tells us about his wine producing...