From the natural amphitheatre of Soldano, the wines of Ka Manciné become the main  characters of the national wine stage 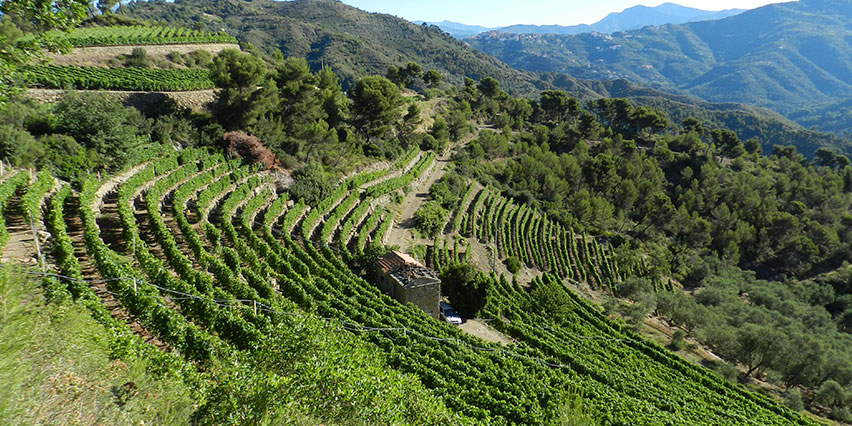 Tre Bicchieri by Gambero Rosso, Cinque Grappoli by Bibenda and the prize “Grande Vino” by Slow Wine are just some of the acknowledgements  obtained this year by the crus (Rossese DOP Galeae and Rossese DOP Beragna) of Maurizio Anfosso, wine grower and owner of Azienda Agricola Ka Manciné in Soldano (Imperia). Maurizio is the custodian of an old family tradition and of a unique heritage of vineyards, those of Rossese, nestled between the Ligurian Sea and the Alps, amidst a mosaic of micro-zones with peculiar characteristics. Here the place names, those of Galeae and Beragna, generate real crus, which seduce the palates of wine lovers more and more with each passing day.

Your wines have already received many awards and appear in sector magazines, but how was Ka Manciné established?
The company Ka Manciné was set up in 1998 thanks to the idea of our historical family, Anfosso dei Mancinei, to retrieve the wine producing tradition of the ancient Rossese vine variety, classified by the procedural guideline Rossese di Dolceacqua DOP in 1972. In the respect of the family history and of this territory, we have recovered the Galeae, replanted in 1998, after the acquisition of several plots of land which had been divided among relatives. In the same year, we acquired Beragna of the Conte family from Soldano (Imperia), about 120 years (old?).

Rossese is the major vine variety of the area of Imperia, tell us more about this variety…
Rossese or Dolceacqua is one of the oldest varieties present in our area, its history is connected to the Greeks in Marseille, and also because of this, it is considered the most “French” of the Italian native vines. Recent studies made by CNR in Turin, coordinated by the well-known ampelographist Maria Schneider, have shown that Rossese and French Tibouren are practically identical from the genetic point of view.
Already Gallesio in his writings from the XIX century told about its presence in Liguria and confirmed the presence in the area of the western coast of Liguria and more specifically in the area included between Nevia Valley, Verbone Valley, Borghetto Valley and some areas of the municipality of Ventimiglia. The studies made by Mario Calvino, father of the famous writer Italo, on the vine and on the territory of Imperia were also important. Calvino was director of the itinerant chair of agriculture at the beginning of 1900.
The growing of Rossese is therefore a fundamental part of the agricultural history of the area of Imperia. It is a particularly difficult vine, both for growing and for wine making, able to produce extraordinarily elegant and drinkable wines. Unlike what has always been said about this variety, Rossese has shown to be quite enduring, with very interesting organoleptic evolutions. The territory becomes in this wine the real element of distinction, that’s why geological, morphological and historical studies have generated those geographical names which wine makers already used historically  to differentiate the origin of one wine from the other and which today appear also in the label.

How is “Rossese” perceived outside of Liguria?
Over the last few years we have been noticing a “Renaissance” of Rossese di Dolceacqua DOP, which is registering success both at national and international level. Its ability to go with many types of food, meat or fish, makes this wine very interesting gastronomically. Its drinkability, combined with its elegance and complexity of scents makes Rossese appealing on the international wine scenario and able to arouse the interest of many wine lovers, who have been coming to visit our cellars for several years.
Wine tourism seems to have, at last, become aware of our territory. Our commitment in exports, thanks also to the higher quality level reached by the majority of companies, has certainly supported the inflow of wine lovers, who are constantly increasing and who are interested in getting to know the product and its origins. Even the Italian wine producing sector has started to give up the idea that Liguria is only the land of white wines and has acknowledged the production of this great red wine, which today is easily found in all the guides and is rewarded with high marks.

What is your approach to wine growing? Which wine making methods  do you use?
We can consider our farming as respectful of the environment and of human beings, we cannot and we don’t want to consider it organic nor biodynamic. We don’t like to write too many additional definitions in our labels, apart from those which already identify our product. We don’t have the capacity to follow the constantly changing protocols. Our philosophy is to intervene only when it is necessary, causing the least possible damage to the plant. I believe in the profound respect for the gifts of nature, which I have learnt from the farmers’ culture. In wine making, we adopt the same concept as in the vineyard, with the least possible interventions.
We try to keep our wines connected to the territory, each label must be the purest expression of that specific plot and must represent the year of production. By applying this simple rule, we are more subjected to climatic changes. Depending on the year, each one of our crus may have different quality levels, promoting one nomenclature rather than another, a changeability which, when wine is concerned, means naturalness.

What does it mean for you to be a “wine producer”?
Being a wine producer, in my opinion, means to possess and pass on the cultural tradition and heritage of my territory. It means basically to convey the love for my land and the respect for those who were here before us, in order to be able to instill it into the next generations.
Being a wine maker means being part of a story, which passes from father to son. That’s why I feel as a custodian of the knowledge I inherited from my grandfathers and that’s why every day, with my efforts, my hard work, my research, I try to communicate whatever I have learnt from them through my wines.

Podere Grecale, where every plant has the attention it deserves

Filippo Rondelli and the excellence of wine, passed...