East to west: most awarded ligurian wines of 2017 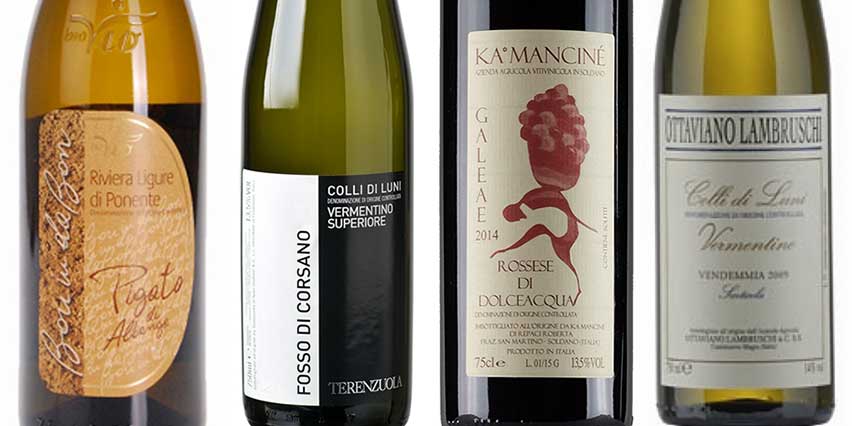 Most awarded ligurian wines of 2017

Liguria is attracting more and more the attention of wine and food magazines. Despite its small size, the peculiar conformation of the land, for the most part formed of mountains and hills, 70% woods and Mediterranean forests, and the presence of only 1500 acres of vine cultivation, the region continues to distinguish itself for the quality of the commercial wine produced, limited but highly estimated.

Of the approximately 4000 wine farms present in the territory, less than half, roughly 1800  according to Agriliguria.net, produce commercial wine, mostly from the west coast, where the production is most favoured by a greater presence of flat area, compared to the east coast. The wine production in Liguria is approximately 105,000 hectolitres, whereas in Italy more than 63,000,000 was produced in 2016. The comparison seems discouraging, however it is not so. In fact, according to the Gambero Rosso guide “This region trapped among mountains and sea is actually capable of producing a genuine gem of wines”. Through sweat, dedication and hard work, the Ligurian wine growers were able to restore the little land available, and make it the home of indigenous vine varieties (and not only), nowadays famous worldwide. We are talking about Vermentino, Pigato, Bianchetta, Bosco and Rossese, but also Ormeasco, Granaccia and Syrah. The last three mentioned perfectly adapted to the Mediterranean climate of the region.

In the last years, the consistent growth of the regional production has made it possible to confront themselves with the great domestic classics without fear. The awards received in the past months by Ligurian wine farmers is a perfect example. The 2015-2016 grape harvest was acknowledged with the prestigious “Tre Bicchieri” award from Gambero Rosso, equally divided between the east and west coast. The “Vermentino Costa Marina 2016” of the Ottaviano Lambruschi wine farm and “Vermentino Superiore Fosso di Corsano 2016” of Terenzuola, were joined also by the red “Dolceacqua Beragna 2016” of the Ka’ Macinè wine farm and the Pigato “Bon in da Bon 2016” of the BioVio farm. But the Gambero Rosso guide was not the only one to have rewarded and recognized the uniqueness of the wine production “made in Liguria”. In July 2016, at the Douja d’Or di Asti, a highly acclaimed national wine competition, 19 Ligurian wines were awarded, 7 with the “Oscar Douja”, a prize given only to those wines that exceed the score of 90/100 in the various phases of the wine tasting. Furthermore, in the last few days, the 10 best wines of “Italy – Bibenda 2018” guide was published. The historical guide with its 20 editions, considered a milestone in the wine and food sector, acknowledged 6 Ligurian wine farms with the “5 Grappoli” (5 Grapes) award, the maximum recognition, and also included the “Rossese di Dolceacqua Terrebianche 2015” of the Terre Bianche wine farm in their National Top 10. Wines that attract the curiosity of the judges usually end up in this special ranking. “We are talking about wines that other than having won  the “5 Grappoli” award with a rating of 91/100 and up, have mostly influenced us, touched our sensibility and delivered powerful emotions. We simply identify them by listening to the soul, mind and heart”. Therefore, national and international recognition to the wine producers of a region which is becoming always more interesting in a wine perspective. For example, the Durin Wine Farm was accredited as best Italian wine farm at the 37th edition of the San Francisco International Wine Competition, and also received two golden medals and one silver at CERVIM, Centre for Research, Environmental Sustainability and Advancement of Mountain Viticulture, a competition which rewards wines produced in areas that are mountainous or involve extreme vine growing, and a silver medal at the international competition Grenaches du Monde. The Baia del Sole wine farm owned by the Federici family received a prestigious recognition at the Berlin Wine Trophy with its “Vermentino Sarticola 2016” and the Possa wine farm won its first silver medal at the “Premio Alambicco d’Oro 2017” competition with its grappa of Sciacchetrà vinasses.

The numerous acknowledgements and awards that never seem to end, is ultimately confirmed by the “Quattro chiocciole”(Four snails) award of the Slow Wine 2018 event, assigned to 4 wine farms from both the east and west coast, that best represent the Slow Food philosophy, a global organization, founded in 1989 to prevent the disappearance of local food cultures and traditions in accordance with producers, environment and ecosystem, of which Slow Wine is a part of. 8 local Slow wines, other than possessing organoleptic quality, embrace history, culture and environment in a glass of local wine. The high standard of the Ligurian wines is a source of pride not only to those that work in the industry, but the revival of the entire riviera.

Wine Influencer: who are they and what they...