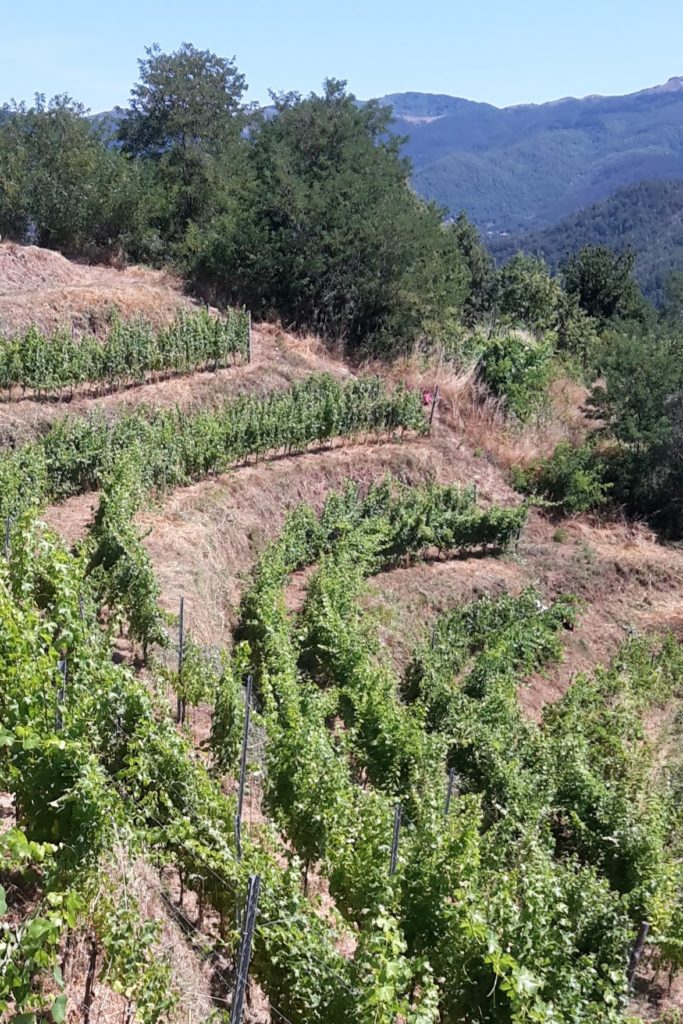 In the past, the Val di Vara valley was noted in particular for its climatic and enviornmental characteristics such as: moist, rain, woods and wilderness, whereas today it is famous for its vegetables, biological fruit and legumes, as well as its traditional genuine cheeses and cured meat products. On the contrary, little is known about its wine tradition, in particular in the Alta Valle (High Valley). However, from medieval times until the last century, the lands were used for the cultivation of grape vines, particularly Seraxina or Buttigiasca (two local cultivars that many consider the same), by which a red wine of little intense color, almost rosè, was produced. Also the Polera cultivar, another antique vine from this valley, showed the same characteristics. Consequently, to intensify the color, grapes enriched with anthocyanin, were added during the wine making process (known as teinturier , a wine term applied to grapes whose flesh and juice is red in colour due to anthocyanin pigments accumulating within the pulp of the grape berry itself, or in ligurian dialect “tinturin”), cultivated at the centre of the vine. Famous and award winning (at the Dublin International Exposition of 1865), were for example, the wines from the Cavalla Nuova Estate, in Varese Ligure, run by the Gabaldoni family, of Spanish descent, that produced and bottled wine that sold throughout the world.

However, from the last half century, the vast majority of the Val di Vara vines became abandoned due to a massive rural and agriculture exodus in favor of lowland region and jobs in industries. But not all was lost. By early 2000, a few small, but bold number of wine producers, not frightened of the gap between the production and distribution site, meaning the coast, recovered part of the territory, restoring several various antique vines such as: Polera, Albarolo, Vermentino and Ciliegiolo, adding new and international grapes such as Merlot, Syrah, Sauvignon blanc and Cabernet sauvignon. Although not local, these vines adapted perfectly in the Val di Vara territory, mainly due to the temperature leap between day and night, permitting the grape clusters to ripen, sometimes prematurely, resulting in a particular wine with interesting scents.

Ivano Luigi De Nevi was the first producer to have bottled and marketed the “new” wine of the Alta Val di Vara. Towards the end of the 90s, he opened a small, but dynamic farm named “Cornice”, in the borough of Sesta Godano (SP), with 2 acres of cultivated vines. Today, Ivan produces 2 types of reds and one white (more of a rosè with grapes cultivated on other fields in Levanto), of high quality, an outcome of the combination of various cultivars. The crown jewel of the farm is Il Plein, a blend made of 50% Merlot grapes and 40% Syrah with a small percentage of Ciliegiolo (10%), of vines cultivated on sandy soils. The red wine produced is smooth and goes with both meat and fish dishes. Imara is the other red produced with a strong tannic flavor, suitable with red meat. The alcoholic strength is 13°, same as the other red, but is composed predominantly of Merlot (60%), 30% Cabernet Sauvignon and 10% of Pollera. The vines from which the reds are produced grow in clay soils, near the village of Zignago, at 500 meters above sea level. Lastly, the white “I Piani” is made up of a mix of Sauvignon and Albarola grapes, typical of the Cinque Terre, and a small percentage of Vermentino, forming a nicely structured fruity wine, suitable for all types of fish dishes.
Another small, but successful reality of the Alta Val di Vara is the Calcinara farm, also in Sesta Godano, a territory famous for horses and outdoor activities, where Daniele Taddei and his wife Antonella Manfredi, since 2005, have produced two red wines, one white and one very unique rosè. Today, the fields where the different varieties of grapes are cultivated, and well exposed, belonged to Daniels mother since her childhood. Restored from the state of decay from which it was found, the vines regained its luster, making it possible to produce interesting wines. The white is a pleasant full bodied wine, made by a combination of native grown grapes of Albarola and Vermentino and a part of Sauvignon blanc, which gives aromaticity to the wine compensating the acidity of the Albarola.
Instead, the two reds, Il Calcinara and il Re de Peiu, are different in both the cultivation of grapes utilized, as well as the characteristics. The first, a blue labelled, is produced only during special vintages, where a higher standard of maturity takes place, ensuring a full bodied wine with important anthocyanin and polyphenol value contents. Polera, Syrah and Cabernet grapes are used to produce Il Calcinara. A percentage of Merlot, is added to this variety to produce il Re de Peiu. The latest wine produced is the rosè Re de Peiu, much loved by tourists, especially by the French. The procedure is the same as the white, by cold fermentation, but the squeezed liquid remains longer in contact with the rinds, obtaining the classical rosè color.

Alessandro Vignali tells us about his wine producing...

Sciacchetrà? A blonde braid that shines in the...